It’s a monumental week: we hit November 9, which means that we are down to less than a month to go! (Assuming my son is a timely fellow!) It’s exciting and terrifying all at once!

My doctor’s appointment was nice and uneventful. Shane had a ton of questions after our hospital tour last week, so we got those taken care of. Most interesting among his interrogation were the cord clamping policy (how much of a delay…this practice’s policy is 30 seconds…some do 60 but she said there’s not much benefit since the blood that’s being cut off in the cord is fetal blood and he will need to process that out anyway) and cord blood banking (not much benefit to private banking because the perks of private can be had with public – and public is free). It’s going to be strange not having constant doctor’s appointments after Eugene arrives. I’m sure I’ll have plenty to occupy my mind and won’t be concerned with that but from this side of things – it’s weird! We’ve had constant appointments for about a year and a half, with the exception of the break we took last November and December, so to think that we only have three more to go…it’s good! But it’s definitely strange.

We finally picked and ordered the baby’s bedding and the coordinating bedding for the day/queen bed that will be in his room. I didn’t take a picture of his bedding, but here it is from Target:

Cute, right? It’s made by Sweet Jojo, which is only online so it was a bit of a crap shoot but when it arrived this week, we were thrilled with it! We almost went with a single print/not quilted version with the deer/squirrel/fox square all over but I found this one and liked it so much better. They also make coordinating bedding for bigger beds so we were able to coordinate without being too matchy matchy. It all arrived when Shane was on his way out the door to the gym the other night and I thought I would try to put the bed together myself…you can see below how well I did before I gave up. Clearly I need my husband to help with such endeavors! 😂 (You can also see the “mess” waiting for the dresser behind the bed…all of the baby gear that needs a home!) 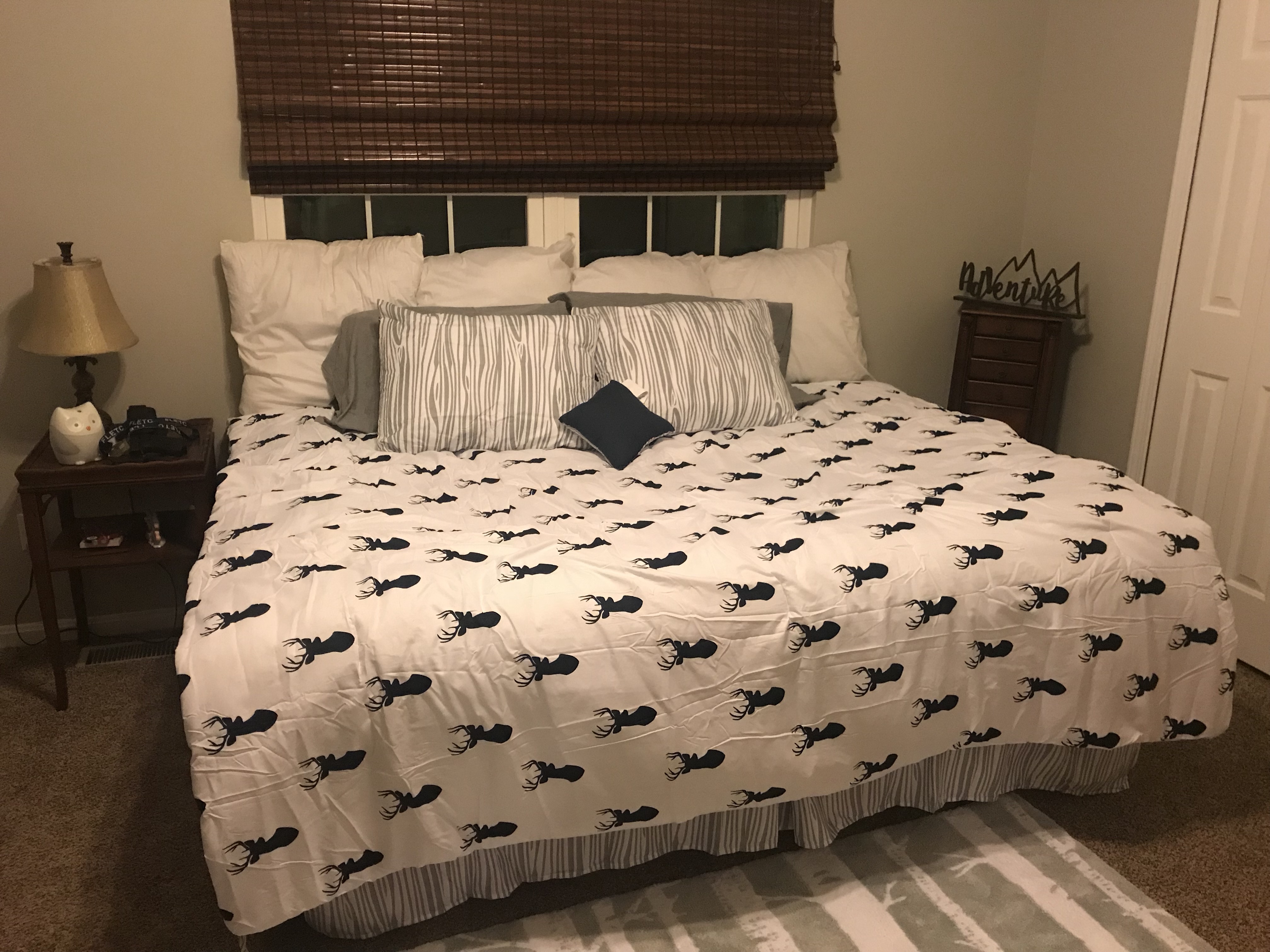 <
nd that up there is the semi-finished product of the furniture we currently have. We still need cases for the euro pillows along the window (navy blue, most likely) but you get the idea. We love the coordinating bedding – and really love that rug in front of the bed. It’ll go between the queen and crib. 🙌

The paint is officially DONE. We had the painters come back again and touch up some areas but, as of Thursday afternoon, we can officially put that project to bed! The flooring people come this Thursday and then we just have to wait for Eug’s furniture and we will be good to go. Hold on to your hats, people. Operation Get the House Together is almost complete! THANK GOD.

We’ve got an exciting 36th week coming… Grammy Ronda is coming back from Florida in anticipation of Eugene’s arrival and we are going to see Wicked with Auntie Emmy and Uncle Chris!

This week, Baby Eugene is about 5.5 pounds and almost 20 inches long – and Mama is getting BIG!