Today is the hysteroscopy. The prep involves Advil and water – easy peasy. They’ve said it can be uncomfortable, but at this point, it’s all uncomfortable so that’s par for the course! Speaking of discomfort, we also had some good news about one of our bills…it said the amount due was around $1200, but if we paid by October 7, we only owed $145. I thought that was just a payment, but when I logged into the bill pay system, it said the total due was $145 and when the payment went through, the balance was $0. Hopefully that’s correct since we’re already exhausted our flex savings account that just started at the beginning of September.

Well, that was fun.

Shane and I met at the clinic this afternoon for my hysteroscopy. The nurse took me back, explained everything, showed me the instruments (!!!!), I signed consents, and she brought Shane in. The procedure involves sending different tools up through my cervix (which, apparently, no one else sees as EXIT ONLY!) to see what’s happening in my uterus. This was, by far, the most uncomfortable and painful procedure I’ve had yet. Once again, thank God for Shane. He held my hand, rubbed my head, and was fascinated by it all. I, on the other hand, was SO uncomfortable. It’s a combination of cramping and stabbing, all in front of an audience. What a show! Dr. Nash did find some polyps in my uterus (two, to be exact) so our plans are slightly derailed for now.

After the procedure was over, we met with Connie, the surgical nurse, about the next step. First, our immediate plans are on pause. Next, and more importantly, I will have surgery on October 14 to remove the polyps. The procedure is pretty quick, but it does require sedation, so the recovery is longer than today’s procedure. According to Shane, the polyps looked something like the ones below. 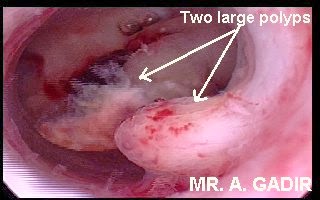 Dr. Nash said that if he were my gynecologist, he would not have worried about these polyps at all, but because we need my uterus to be in tip top shape, we need these polyps gone.

We have been joking tonight about our expectations through all of this…every time we expected something, we were completely wrong. We thought one more med cycle – wrong. IUI next – wrong. IVF cycle going as planned – wrong! We remain as hopeful as ever, but our “plan” is out the window (as, let’s be honest, it should have been weeks ago!).