First week of the third trimester down…12ish to go! 😳

We had a busy busy week! I had a glucose screen on Saturday, which I failed, though not miserably, just a little bit. That’s good news but the crappy news is that I now have to have the real three hour test on Saturday morning. I’ve done it before as part of all of our testing during Summer 2016 so I know what to expect but I’m not looking forward to it. Hanging out at the Cleveland Clinic lab for a few hours of my life – whoohoo! 🙄

We also picked a stroller this week! Emily and I went to BuyBuyBaby to check them out and see which will be the best fit for Shane and me. We narrowed it to two: the Thule and the BOB Flex. Shane and I went back on Tuesday and decided on the BOB. They’re both so nice – just a personal preference for us! As you can see below, Shane was impressed…

The best part for me is that, because it’s from BuyBuyBaby, it’s 20% off! Love those coupons! 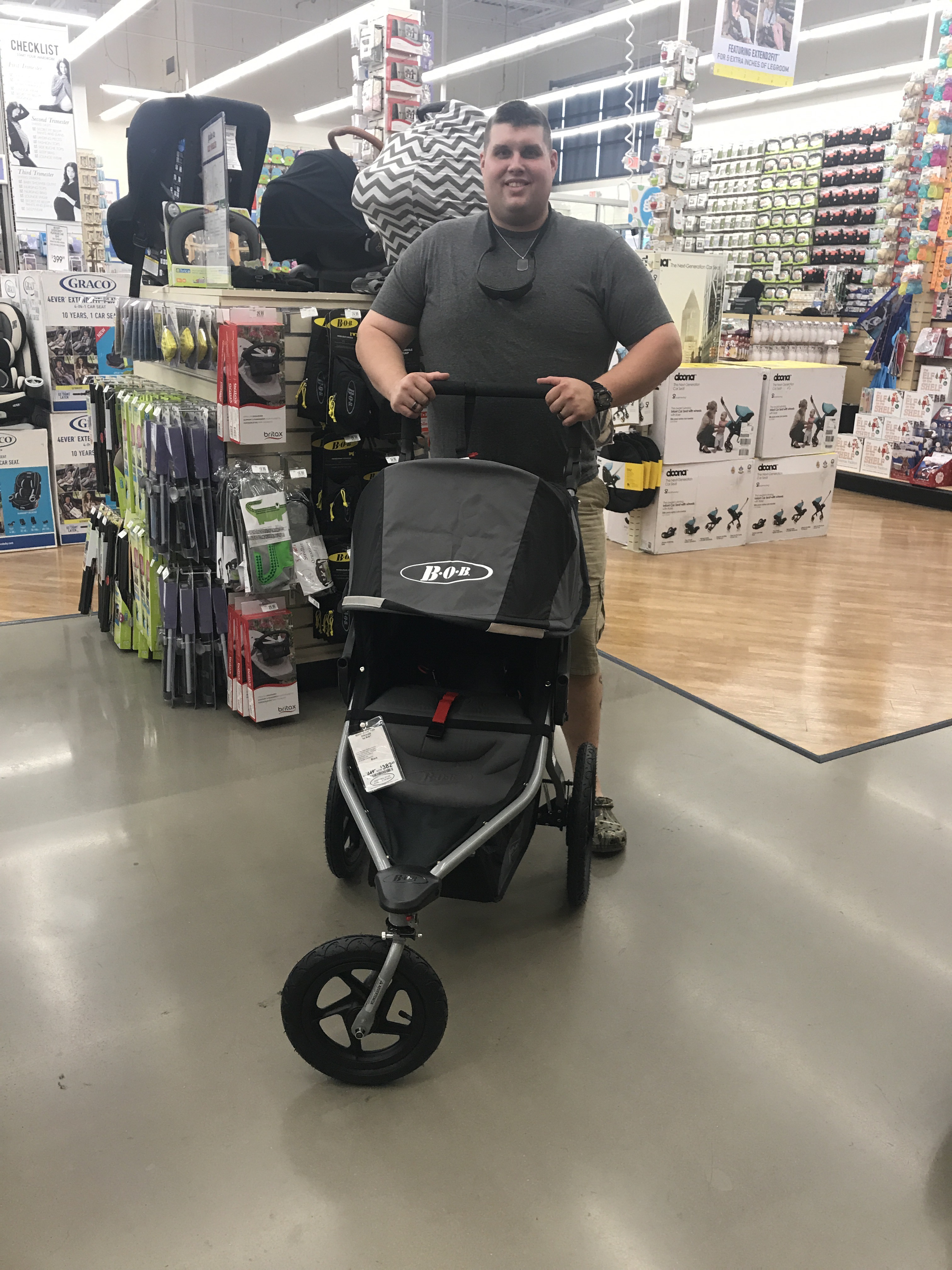 We got another awesome gift – our booster car seat! One of my lovely friends is going to lend us her infant car seat so we have that under control but the booster seems extra important because Eugene will be in it for much longer. Thank you to Aunt Cindy and Uncle Guy! And speaking of aunts and uncles, I have been blessed with some incredible ones and I am so thankful that Eugene will have that too. We’ve had some serious talks, my aunts and uncles and me, about my expectations for them…I’m kidding…kind of…but they’ve always served in that fun-pseudo parent role but now that we’re missing both Mom and Dad, the pseudo part is diminishing and we need them more and more. As I’ve said before – no doubt – Eugene will know lots of love.

He also had the privilege of attending both his first Bedford Bearcat AND Massillon Tiger football game! Dad’s whole family is from the Massillon area and we grew up Tiger fans (how can you not with a dad and all of those family members I mentioned bleeding orange and black?) so when we saw that our home team of the Bearcats would be battling it out with the Tigers, we HAD to be there. We brought Uncle Dave and Aun”T” and her friend Jackie and had a great night watching high school football in one of the best high school football venues around. Unfortunately, the Bearcats didn’t pull out the “W” but we had a great time regardless!

And, finally, the size update…

Eugene is the size of a milkshake! (Appropriate as I’m finishing this post while I sit through the three hour fasting glucose test!) He’s about 15″ on the nose and about 2.5 pounds. Still super skinny! (Which is fine with me for now!) September is FLYING by! At the start of the next week, it’ll be baby shower day – hard to believe!