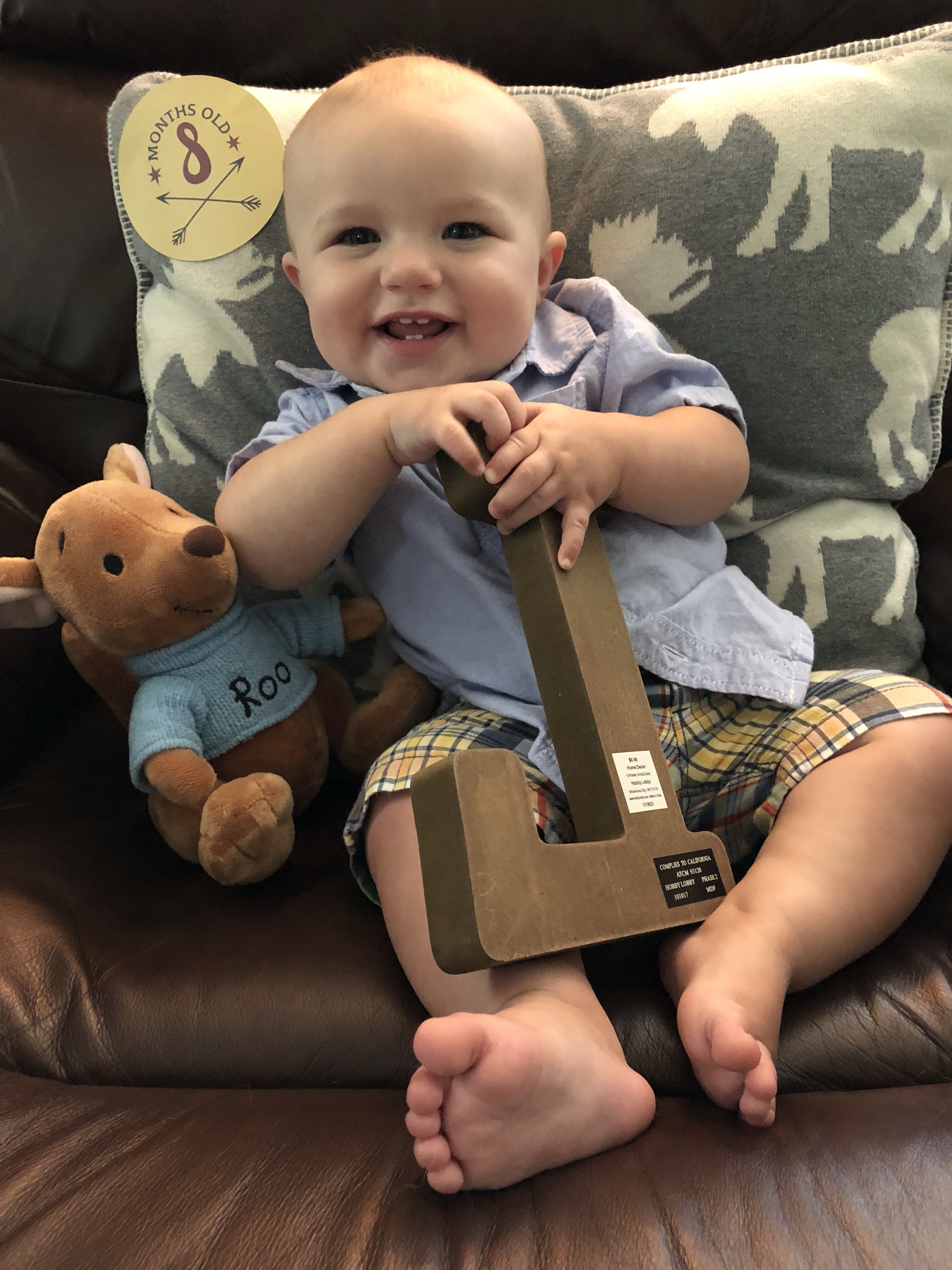 I could be a completely broken record and repeat the same phrase over and over again every hour, day, week, month of Liam’s life…and I think I will: I’m amazed!

This month has been another crazy one. My sister and I recently discussed this phenomena: we think summer is something it isn’t. We think it’s endless, full of longer hours, and can be both relaxing and a time to catch up on everything that’s neglected the rest of the year. In all reality, in the education world, it’s still only eight weeks, and it’s eight weeks that fill up FAST. The past four weeks have been a great example of that! I have no idea where the summer went…but I’m sure I’ll spend the next nine months looking for it – and will find it again next June!

Pool Time!: We took Liam swimming for the first time at Grammy Ronda and Grandpa Hank’s house a few times in preparation for our summer trip to the Outer Banks. His first foray into the water was a little unsettling for him I think…but it took him virtually NO time to get settled. He floated around in a little blow up raft, “swam” between family members, splashed A LOT, and enjoyed the water. Our updated swim plan is to keep him in the water throughout the non-summer months so that he doesn’t develop a fear. 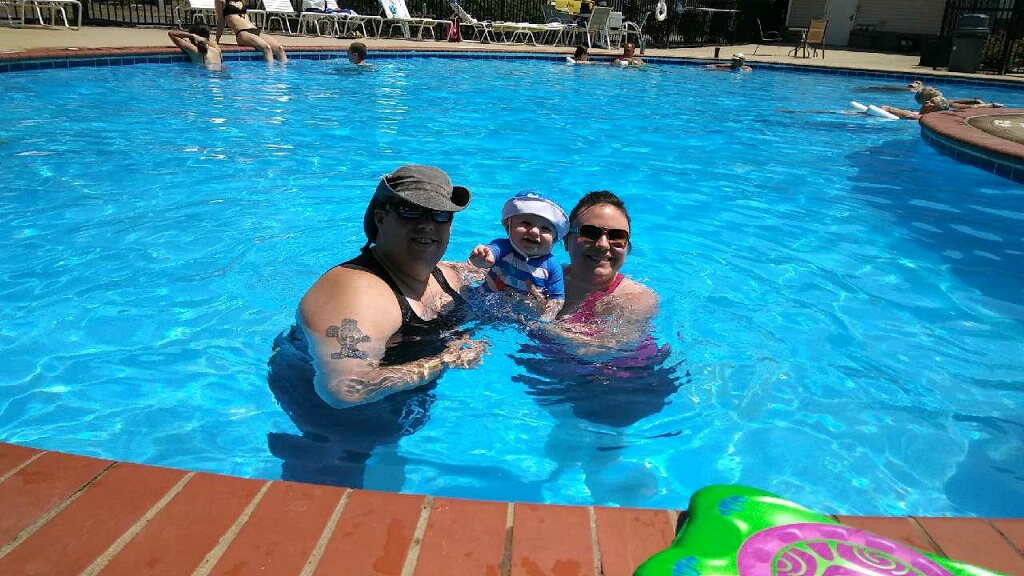 Family Time: Summer may be short, but it does make visiting with family so much easier! We got to see Uncle Bob & Aunt Val, Katie & Erin, and the Grandmas (and of course our usual fan club of Grammy & Grandpa, Nana & Pappap, Uncle Papa & Aunt Kathy, and his fabulous aunties). 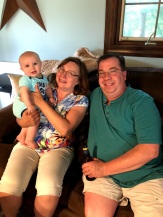 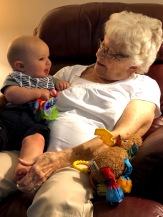 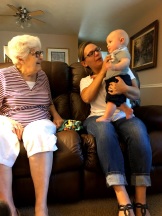 Peanut Butter: Basically, there are a few requirements to being a member of the Cox family, and they’re not super difficult to follow… First, you must like pie. People who don’t like pie really struggle to affiliate. There’s teasing, insulting, being made to go hungry…it can get kind of ugly. Next, must love cheese. Cheese is present at every meal. Not just cheese in the dish, which is likely how normal families incorporate it, but as a side dish, an appetizer, and sometimes as the snack after the meal (before or after the pie). Third, peanut butter is a non-negotiable. That’s especially important in our branch of the Cox tree, as my father put it on just about everything. (There’s a famous anecdote among us about Dad asking for a pretty normal sandwich…tuna, peppers, cheese, hot sauce, mustard…AND PEANUT BUTTER. YUCK.) Auntie Emmy had been promising to teach Liam about peanut butter for a while, so once he was onto solids, she insisted that she be the one to do the formal introductions. See below for the video. (Spoiler…he’s still a member of the family!)

Mobility: This kid is crazy mobile. He’s super fast when he crawls, pulls himself up like it’s nothing, working on pulling himself along furniture, and is working on standing on his own. He’s been doing the .2 second “stand” before the fall, but lately he’s working on actual seconds worth of standing. I’m sure that by the next month’s update I’ll be telling you that he’s taking steps without any support! This kid is strong and ready to GO. His daddy likes to say (with an absurd amount of pride): THIS KID IS A BRUISER.

BANKS BOUND: We spent a week in our happy place: the Outer Banks. It’s been two years since we were there so it was absolutely time to get back. We stayed in Southern Shores, like we did the last time, which is a great location for quiet, yet with easy access to the more touristy areas with restaurants, stores, etc. The house wasn’t nearly as fancy as the one we stayed in two years ago but it was completely sufficient and still managed to have a pool (with assorted amphibians) and a hot tub. At first, Liam wasn’t too sure about the sand – and I wasn’t too sure about the sand in his mouth – but by the end of the week, he was taking good naps in the sun tent and letting us stay on the beach for most of the day without melting down. It was a great week with our family…and we’re looking forward to spending TWO weeks there next summer. #teacherperks 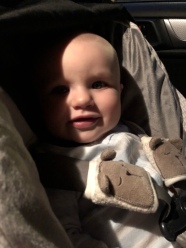 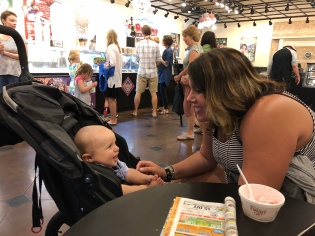 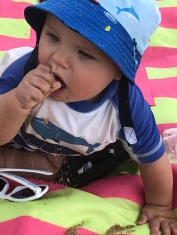 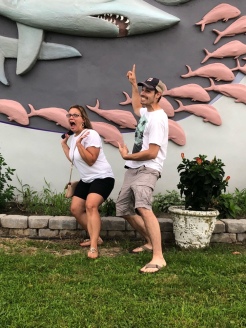 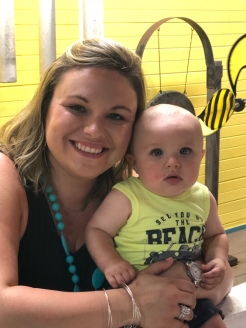 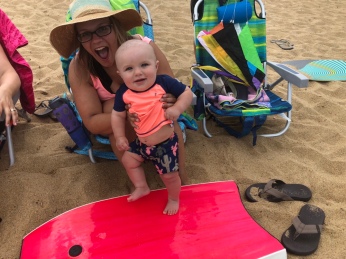 Food!: He’s eating basically everything. Certain foods freak me out because he’s either gagged on them or I think he’s going to gag or I don’t think he’s got enough teeth to chew it up, or whatever, but basically, he eats what we eat. Makes meal planning for him much easier! If there’s not enough baby-friendly or plain enough food in our meal, I’ll supplement with some yogurt or applesauce, but basically, he’s eating it all!

Teeth: Speaking of eating! The boy’s got SIX teeth now! Three up top and three on the bottom. He sprouted the top two around the same time (that was a fun time……) then he got an eye tooth going…and then another bottom next to his front bottoms (those are absolutely NOT the correct terms!!) all around the same time! They’re so cute in his little mouth. I can’t!

And finally, this has easily been the best summer of my life. Emily and I have often reflected that, while many people have seasonal affective disorder in the winter, with all of the tragedy we’ve experienced, we have it in the opposite way. Thankfully, Liam is a bit of a distraction from the birthdays and anniversaries that rock our world each June, July, and August.

I feel so fortunate to be able to spend so much time with my little man. I’ve had so much fun watching him learn and grow and explore and start to become a little person (instead of a little potato!). As I’m being faced with heading back to work this week, I have to remind myself that lots of working mothers (including my own!) aren’t lucky enough to be able to spend months of time with their babies, nor are they lucky enough to have things like spring and Christmas breaks, full of time to spend with their kids. That said, the mommy guilt is real, and in the interest of transparency, I’m struggling.

To be continued in Month 9! (OMG. Hard to believe I’ve had Liam almost as long as I had Eugene!)